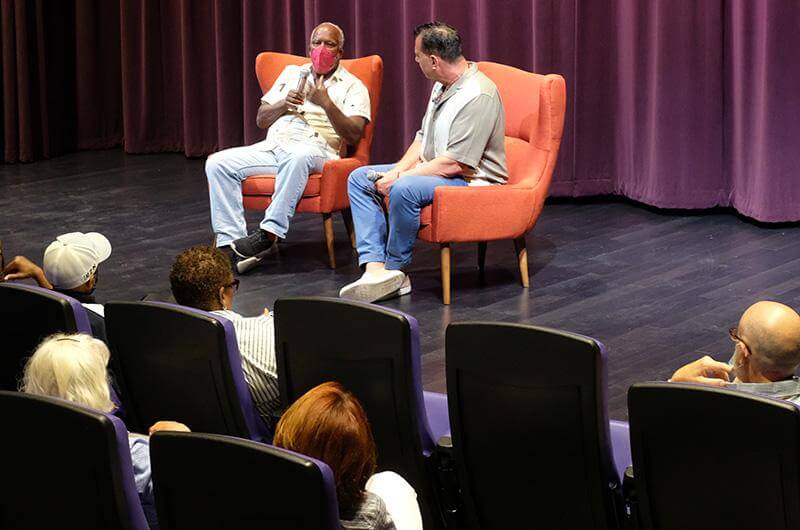 Lifting Up the Lives of Key Abolitionists

Among the Island’s many talented artists stands Stanley Nelson, a three-time Emmy Award winner, MacArthur genius fellow and recipient of the National Humanities Medal. On Wednesday, Mr. Nelson brought his two latest documentaries, Becoming Frederick Douglass and Harriet Tubman: Visions of Freedom, to the Martha’s Vineyard Film Center, and joined the audience for a discussion afterwards.

It was only the third screening for these two hour-long television specials, which are set to premiere on PBS in October. Each documentary follows the life of its titular figure from slavery, to freedom, to prominence as abolitionists and thinkers.

Both films, Mr. Stanley told the audience Wednesday, were commissioned by Maryland Public Television. Ms. Tubman and Mr. Douglass were born in Maryland, outside of the Deep South or the “Cotton Kingdom,” and many of the enslaved people were not owned by plantations but smaller farms, he said.

Frederick Douglass spent a significant portion of his upbringing in Baltimore, Mr. Nelson said, where he had exposure to a free Black population that was almost as large as the enslaved population.

Exploring the tension between visions of the Deep South and more northern slave-holding states was one of Mr. Nelson’s primary interests in pursuing these films. It also made finding archival images difficult. The team avoided pictures of cotton-producing slaves, he said, and tried to find images that more accurately reflected Ms. Tubman’s and Mr. Douglass’s upbringing.

“We used a lot of Maryland-based archives,” he said.

Becoming Frederick Douglass traces the rise of Mr. Douglass, an escaped slave, abolitionist orator and publisher. At the time of his death, the documentary explains, more Americans had heard Mr. Douglass speak that any other living American (with the possible exception of Mark Twain). Mr. Douglass taught himself to read as a boy, escaped slavery disguised as a sailor with the help of his wife and settled in Massachusetts, where he joined the abolitionist movement and attracted the ear of American’s most prominent politicians, including Abraham Lincoln.

Harriet Tubman: Visions of Freedom outlines a different path. Ms. Tubman was not an orator, but an activist with boots on the ground. In eight years, she led 13 trips on the Underground Railroad akin to military raids, the documentary explains. In the Civil War, she planned and executed the military raid on the Combahee, which liberated more than 700 slaves.

Read more at The Vineyard Gazette.